Hey all, welcome back to Cool Cats! I’m ending my hiatus with a special treat. As mentioned in a previous post, Brandon Vogt is hosting a Support a Catholic Speaker Month, which is happening right now. As a participant, it was my good fortune to acquire the privilege to write about Tim Staples. 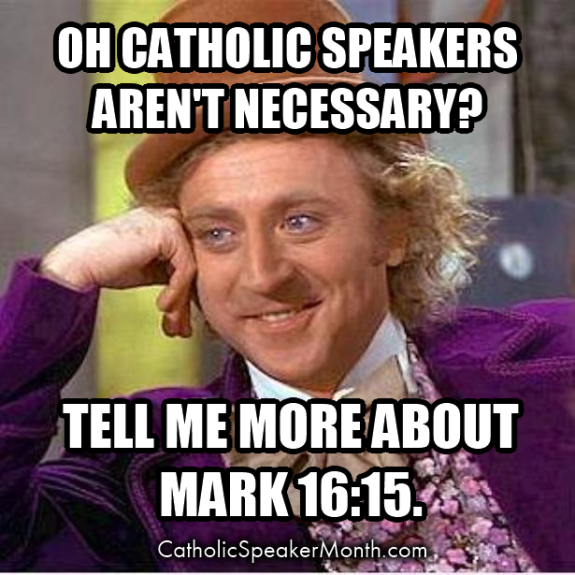 I specifically chose to write about Tim because, when I was a youngster, he gave a talk at my home parish and was my first introduction to the world of Catholic apologetics. It wasn’t a minute too soon, because between the internet and classmates, I was already facing such daunting questions as “Where is that in the Bible?” or phrases like “Catholics aren’t Christian; they believe in works getting you to heaven.” Key to Tim’s effectiveness isn’t only that he knows the ins and outs of Catholic answers to the above statements (not to mention he’s also the Director of Evangelization at catholicanswers.com), it’s that he once believed them.

Tim Staples was raised in a very southern and very Baptist southern Baptist church. This meant growing up in a mindset that not only was the Catholic Church not Christian, it was the whore of Babylon, oh my! He fell away from his faith during his teen years, but he came roaring back with the help of televangelists when he was 18 and about to set off for the Marines. With a renewed vigor in Christ, he participated in Bible studies and ministries throughout his military service and found his way into the Assemblies of God.

During his final year, however, he encountered something that many cradle Catholics haven’t even seen: a Catholic who knew his stuff. This fellow marine was Matt Dula, and he sparked Tim’s journey to prove the Catholic faith wrong. ‘Course, you can see how well that turned out.

Tim immediately followed his conversion with entrance into the seminary, and though he knew maybe halfway through that it wasn’t his true calling, he remained there for six years. Let’s all be thankful for this, because it surely gave him the necessary knowledge for his calling of apologetics without whisking him away to the serious time-eating obligations of a priest. The resulting fruits include the DVDs Why Be Catholic and The Bible Made Me Do It, as well as his book Nuts & Bolts: A Practical Guide for Explaining and Defending theCatholic Faith and speaking tours related to all of the above.

It's worth noting that Tim gives special thanks to his protestant brothers and sisters for helping him form an authentic relationship with God, and indeed we all should only approach other Christians in a loving manner should the opportunity for apologetics arise. Yet, apologetics isn't just trying to prove to other Christians our own Christian existence, it's showing ourselves the well grounded roots and teachings of the church we attend!

You might recognize from the clip above: "I led many Catholics out of the Catholic Church, I never met a single Catholic who was either willing or able to defend his or her faith."

Email ThisBlogThis!Share to TwitterShare to FacebookShare to Pinterest
Labels: Author/Thinker, Other coolness

R.E. Johnson
Two paws for typing, one mouth for meowing.